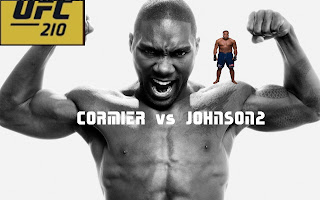 Posted by Brian Kunath at 3:26 PM No comments: 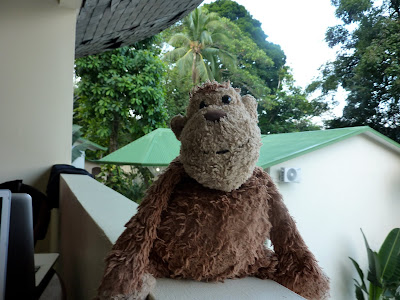 Posted by Brian Kunath at 9:29 PM No comments:

Remember blogs? They were quite the hot item back in the aughts.

If found this one collecting dust in my Firefox browser tab. I started it back in '05 and updated it every day, or every other day. Or every other week. Then month. Now year.

I wonder if I could get the old girl running again?
Posted by Brian Kunath at 1:01 PM 4 comments:

If I knew it was gonna be that kinda party...

I didn't really get into the Beastie Boys until 1994.

"Ill Communications" is a great, great album, but when it came out I still had too much Syracuse in me to allow myself to like it. I watched the videos 100 times on MTV and never turned the channel. I heard the album 50 times at the pool hall at Buff State. I liked it, but I didn't officially like it. I considered them obnoxious New York dicks -- and most of their fans at my school were also New York dicks.

"Paul's Boutique" passed me by unnoticed. Nothing jumped out at me, though a lot of my friends call it their best album. Then came "Check Your Head" and I started paying attention. By then I was getting into new music, mostly because the guys I hung out with had better taste. The Beasties converged into the whole wave of new music in the early 90s.

But it all came together for me with "Ill Communication." I loved that album. Still do. And one of my favorite parts is the moment in "B-Boys Makin' With The Freak Freak" when the music stops and they sample a snippet of a dude who says:

"Shit, if it's gonna be that kind of party, I'm gonna stick my dick in the mashed potatoes!" There's this explosion of laughter and then the song kicks back in.

For years, I wondered where that sample came from. A movie? Some random snippet captured during a recording session? Well, today I looked it up on what's becoming the best site ever: YouTube.

It's from a comedy routine by Mantan Moreland. Check out his Wikipedia bio. He's one of those actor/performers who had a really intersting career that spans almost every medium you can think of.

In the 1965 he made a comedy record called "That Ain't My Finger." Which might be the best album name EVER. This is around the time Redd Foxx was cranking out recordings of his Vegas act and selling them as "party albums." Mantan has that same kind of feel.

So watch this bit and enjoy the full setup for the punchline the B-Boys sampled. Give a listen to the whole thing. He is really funny and the reaction of the audience just adds to the feel of it. The language and references are dated, but he's got some really clever, self-effacing jokes that feel totally today. My favorite has to do with demanding hot water from his wife...

Proof that Louis CK is the best comedian working today.

The Art of Bullshit, Pepsi-Style

I work in an industry that is fueled by bullshit. Advertising is full of it. It’s also filled with very smart, creative people who work incredibly hard to produce work they can be proud of (Which often has nothing to do with whether or not it’s at all successful at bringing in customers). There's a lot of talent in advertising, no question. There's lot of genuine brilliance. Plenty of beautiful executions. But there is also a whole truckload bullshit to be found.

I once heard a writer pitch a concept that equated the arrival of Internet search marketing to the invention of the Gutenberg printing press. (Hmm. One transformed society, enabling the scientific revolution; the other serves up text ads for Viagra when you Google "limp dick.") The other creatives in the room were choking back laughter as the account team nodded in awe.

Another time I pitched a TV spot at a sister agency to a room full of creative heads from three different general shops, only to have it waved off as being "derivative." The next guy got up and his pitch was simply two words: Michel Gondry. He kept saying it over and over again, like some witch doctor’s incantation. Michel Gondry. Michel Gondry. As though the director himself might materialize on the conference room table and ask in his impish French accent why he was summoned.

The overpaid-caustic-Eurotrash-consultant-douche presiding over the meeting tapped his waxed, hairless forefinger on the table in approval. I looked at my boss. He stared down at the table. Meeting over.

As we left the conference room, people in office cubicles were crying and packing their belongings in boxes. Saying goodbyes. Hugging. The new business guy whispered to us that their agency had just lost Coke and was going through layoffs. Now they were going to another major client with their big idea: Michel Gondry.

A week later I learned they lost the account. Two months later, I saw the spot I originally pitched air on TV. A Winter Olympics spot. Those fuckers.

All of this is just a preface to say that I’m no stranger to the power of bullshit. But nothing could prepare me for the leaked Pepsi rebranding presentation I downloaded last night. This is advertising bullshit of a caliber I’ve never seen. It belongs in some ethereal realm of ideal forms of bullshit, towering over lesser forms of bullshit like, say, the justification for invading Iraq or the testimony before congress by the cigarette CEOs.

I read the entire presentation (crafted by the Arnell Group), mesmerized. Never have I beheld such a heaping load of bullshit so fearlessly presented. They name-drop Pythagoras and Da Vinci. They reference the Theory of Relativity and the Golden Ratio. They use nonsensical diagrams filled with random geometric equations. They draw circles around old Pepsi logos, then draw other circles within those circles. They fucking suggest that their new design (dubbed “BREATHTAKING”) exerts a gravitational pull upon the consumer as he walks down the aisle.

You think I’m fucking with you on that last point. I am not. This is so cuckoo that I have to actually try to describe it. Here’s the connection they attempt:

The sun streams light outward in a straight line. Yet the Earth (a sphere), by the nature of its (also spherical) spinning center, exerts a magnetic pull called gravity that works with the sun’s mass to create a spacetime curvature that effectively bends the light toward it. (Or something like that) It’s almost as though the light of the sun is irresistibly attracted to the spherical design of the earth.

Now get this shit. Like the sun’s emanating rays of light, the consumer’s line of sight in a typical shopping aisle travels in a straight line, from one end of the aisle to the other. Yet as he moves down the aisle, his line of sight bends toward the spherical design of the new Pepsi logo. He can’t help it any more than the sun can help it. It’s physics. 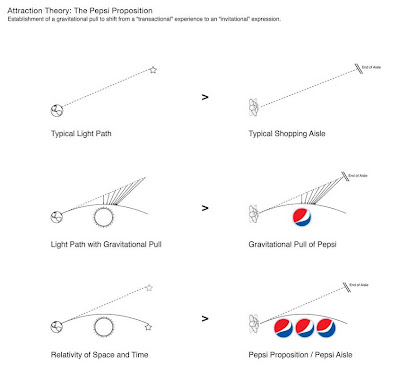 The best part is that this connection is not presented as an analogy. That would be pretentious but forgivable. No, they seem to be suggesting the two scenarios are the same – governed by the same scientific laws. To get customers to pay attention to Pepsi at the Harris Teeter, the Arnell Group recreated the solar system. Nice work, SVA designers.

And that’s not even the most ridiculous connection attempted in this document. It’s entirely constructed out of non-sequiturs. No single thought connects to the next. It’s almost disorienting. You get dumber reading it.

Just to level set for a moment. The entire point of the rebranding is to sell a carbonated, fructose-filled beverage. Soda.

And yet, it won! It extracted hundreds of millions of dollars from one of the most powerful companies in the world. It made the agency rich. It secured the careers of everyone involved. The new logo is everywhere.

Therefore, it's genius. Why is it genius? Three reasons:

1) A creative director once told me that if you convince the client that your concept is right, the execution is almost irrefutable. This Pepsi presentation actually references 5,000 years of design, mathematics and science to back up the reasoning behind the concept. So if you have a problem with the concept, you must not agree with Da Vinci, Einstein, Euclid, Descartes and Mobius. That’s balls.

2) There is a perfect mix of pretentiousness and nonsense that works particularly well in big meetings. Imagine a creative director presenting this, perhaps in a light British accent, to a room filled with clients. These aren’t dumb people. They’re analytical and logical. But they also want to seem hip and creative. So no one dares raise a hand. No one dares disrupt the meeting to say: “Excuse me. But what the fuck are you going on about?” Because they don’t want to be the dumb one. Years of conditioning have taught them to read the room and follow the pack. So they nod their heads. To stride into such a room with this level of bullshit is brilliant. It’s like wheeling in the Trojan Horse. Here’s your gift, motherfuckers.

3) The thinking behind the logo is so fuzzy, loose and psychotic that it's actually hypnotizing. It seems to be constructed, not to make logical sense, but to disconnect the audience from its powers of reasoning. It’s a visual hallucinogenic, leaving you stunned and dreamy. This is the sort of trick the Joker would perpetrate upon the Gotham City Council (“a pernicious PowerPoint presentation”), leaving the council members in a trance as his henchmen steals away with bags of money.

In conclusion, I am at once repelled and in awe of this presentation. Please give it a read. But wait at least an hour after you eat.

One more cup of coffee

Bob Dylan is maybe the coolest guy who ever lived. And here's one of my favorite lyrics from a great song off an under appreciated album:

Your sister sees the future
Like your mama and yourself.
You've never learned to read or write
There's no books upon your shelf.
And your pleasure knows no limits
Your voice is like a meadowlark
But your heart is like an ocean
Mysterious and dark.

That last line kills me. Fucking genius. And the violin is devastating.

That whole song evokes in me a short story by Steinbeck called "Flight." Don't ask me why. It might be a tone thing. Maybe it's the mix of American mysticism and hard reality. Maybe it's because the two families described could be neighbors. Maybe it's the outlaw themes. Read the story here.

Watch a performance of the song here: